sumber : news.detik.comElio Di Rupo, the man named to try to end Belgium’s seemingly intractable political crisis, has been grappling with challenges all his life.On one level, this son of Italian immigrants is living the Belgian dream, rising from poverty to play a crucial, unifying role in his country’s political future.

On another, he is very definitely a Walloon, as Belgium’s French-speakers are known, who struggles to speak Dutch but is passionate in his determination to unite Walloons and Flemings alike.

Another view is that he is simply the man of the moment, the latest in a line of “formateurs” – as government brokers in Belgium are known – who happened to be there when the eurozone economic crisis concentrated Belgian minds.

What seems clear, however, is that, at 60, Elio Di Rupo is very much his own man, as distinctive as his trademark red bow ties.

The picture that emerges from a freshly published biography, largely based on interviews he gave to Belgian journalist Francis Van de Woestyne, is of a fighter, unafraid to take on challenges both in his personal and public life. 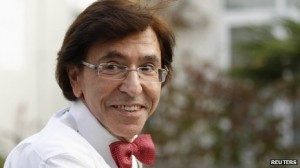 He was born on 18 July 1951 in the small town of Morlanwelz, in Belgium’s French-speaking Wallonia region, to parents who had emigrated from a village in Abruzzo, San Valentino, in search of work. 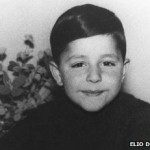 "I cannot say I had an unhappy childhood"

At the age of one, he lost his father in a car crash. Struggling to raise seven children, his illiterate mother gave some of them up to a nearby orphanage.

“Even so, I cannot say I had an unhappy childhood,” Mr Di Rupo recalled. “With nothing, she gave us happiness. On celebration days, she would buy sandwiches that she cut in two.”

He remembered how his Roman Catholic mother would light a candle in church every time he sat an exam, and would say “May God bless you” each time he left her.

His graduation day as a chemist – he studied at the University of Mons-Hainaut and at Leeds in the UK – was, to her, “as good as a wedding”.

“When she died, I felt an infinite, unspeakable sadness.”

Embarking on adult life, Mr Di Rupo left behind his Catholic upbringing, and described himself in the 2008 interview as an “atheist, rationalist and free mason”.

Already as a student in Mons, he had become active in the Socialist Party and his political career took off in the city, where he rose to become an MP and mayor.

One of his achievements in Mons was to set up an international festival of love films in 1984, an annual February event held, appropriately enough, around St Valentine’s Day.

Mr Di Rupo, a homosexual, found his own love life suddenly under scrutiny in 1996 when he was falsely accused of having had sex with under-age males.

According to Van de Woestyne, Mr Di Rupo admits that he might have killed himself had he not been totally vindicated in the affair.

Speaking to the author of Elio Di Rupo, A Life, A Vision (French: Elio Di Rupo. Une vie, une vision), he recalled being pursued down the street by a media pack and how one journalist had exclaimed “Yet they say you’re a homosexual!”

“I turned around and shot back: ‘Yes. So what?’ I will never forget that moment… For several seconds there was silence… People were so surprised by my reply they stopped jostling each other. It was a sincere, truthful reply.”

His career did not appear to suffer. Three years later, Mr Di Rupo was leader of the Socialist Party and, shortly afterwards, became regional prime minister of Wallonia.

“Being the chief minister of a regional government is just a pastime compared with the hellish job of being prime minister of two different communities brought together,” he told the BBC News website.

“You have to have very strong personal skills to bridge all rivalries. Di Rupo surely has the skills to be in command, otherwise he would not have succeeded in the most difficult negotiation ever.

“But much will depend on his empathy for Flemish public opinion, which is extremely volatile.” 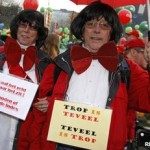 Mr Di Rupo, Falter believes, does not yet enjoy cross-community appeal though he is credited in Flanders with having solved the government crisis at last.

“It is quite obviously his success,” he says.

“It is he who smoked out the Flemish nationalists and then extremely slowly, and through a very minimalist approach, brought the negotiators day by day closer to each other.

“It is a very Italian approach to politics, without bravado and visionary moments, but he succeeded and who can prove that someone else would have achieved this?

“The markets did not play a significant role, except in the final week.”

“He takes a lot of time to listen to everyone and thus has many strategies for finding compromises, and he has good contacts across the political spectrum.”

Where Mr Di Rupo may struggle is in convincing Flemish opinion that he, the leader of the French-speaking Socialists for the last 12 years, can enact vital economic reforms, Falter notes.

“These doubts, that the man who has been holding the brakes so long should now become the guy who turns the steering wheel, have not been dissipated though he and his party have engaged timidly in the reform process in a way you would not have expected from them, say, half a year ago.”

Among the Socialist leader’s weaknesses are perhaps a lack of creativity and a tendency to consult lengthily before taking a decision,Van de Woestyne adds. And a major failing in the eyes of many Flemings is his poor command of Dutch – the language of 60% of Belgians.

He may have learnt English while studying in England, but his mistakes in Dutch have been mocked. At a news conference, for instance, he used the Dutch word “drinken” (English: drinking) instead of “dringend” (urgent) when talking to reporters about economic austerity.

Flemish separatist leader Bart De Wever, who was excluded from the coalition talks, remarked: “My Nigerian cleaning lady, who has been in Belgium for two years, speaks better Dutch than Elio.”

Mr Di Rupo, quoted by AFP news agency, has promised to master his country’s other language and deliver his responses in parliament “in Dutch, with mistakes”.

In any case, his success in the government negotiations is what matters now to the Belgian public, Van de Woestyne suggests.

“Belgians are very grateful for his efforts to resolve the government crisis, which has lasted too, too long,” he says.

“If he is not quite regarded as the country’s saviour, he is being seen as the man who ended the crisis.”

According to Falter: “He may not bring the country alive again but he might succeed in keeping it afloat for a few years, which might be enough to make it survive through a difficult period.”